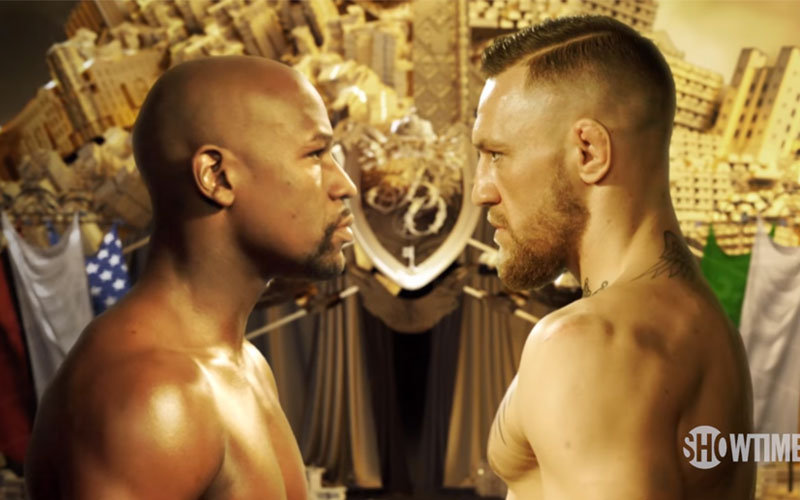 Trash talking, staredowns, and heated press conferences worldwide have set the stage for what pundits are calling "The Billion Dollar Fight": a matchup between Irish UFC star Conor McGregor and American boxing champ Floyd Mayweather. We're just three weeks away from showtime on Saturday, August 26, and already the fight is generating historic buzz.

You can buy the fight pay-per-view. You might find it in a theater. Or, you can be in T-Mobile Arena in Las Vegas to witness the real deal.

Which would leave a bigger impression on your big clients, top performers and VIPs?

Read on for details of what's at stake in the historic matchup - and the easiest way to snag seats for those most important to your business.

"It's not a boxing match so much as a reckoning between the greatest fighters in the world. The longer the wait, the greater the want." ~Mayweather vs McGregor - 'Billion Dollar Fight'

In one corner of the ring stands 29-year-old UFC lightweight title-holder Conor 'The Notorious' McGregor, a Dubliner facing seemingly insurmountable odds. Having only recently obtained his professional boxing license, he will be facing all-time boxing great Floyd 'Money' Mayweather in his first professional match.

An undefeated (49-0) five-weight boxing world champion from Grand Rapids, Mich., Mayweather is coming out of retirement at age 40 for a fight expected to earn each boxer $100 million or more.

On August 26th, the sold-out T-Mobile Arena in Las Vegas will be swarming with more than 20,000 people hoping to catch a glimpse of history. The Daily Mail reports that the combination of event tickets, pay-per-view revenue, sponsorship, merchandise and more will generate at least $600 million, potentially unseating Mayweather's bout with Pacquiao as the most lucrative fight in history.

The fight is making daily headlines and already trending on social media as the big day approaches.

Athletes and celebrities from all industries have weighed in. Pro boxer Victor Ortiz sided with his fellow boxer, saying the MMA-boxing crossover "makes no sense" and is like "comparing ping pong to tennis;" boxing legends Mike Tyson and George Foreman have expressed the same. A-list actor (and pro kickboxer!) Idris Elba, however, predicts McGregor will use agility and surprise from MMA to topple Mayweather's composure. And boxer Paulie Malignanni, initially skeptical of the matchup, sparred with McGregor and declared he had won his respect.

Warriors star Draymond Green even tweeted in support of Mayweather after McGregor was seen wearing a #23 Warriors jersey... not realizing it was a reference to Mayweather's known history of domestic violence.

Of course, it wouldn't be 2017 without an Instagram feud. Mayweather announced a last-minute reduction in their boxing glove weight to help "McGregor feel more comfortable in the ring", prompting McGregor to fire back, "Pick whatever size gloves you want as well little man."

Another handy 12 rounds today. We are prepared to destroy Floyd. Pick whatever size gloves you want as well little man. I fight with 4oz. I don't give a f**k about the size of the glove. I am coming sprinting at you with bricks. Know that. Brittle hands.

Higher Stakes than the Super Bowl

If you're the betting type, money on Mayweather is being called one of the surest bets in sports, opening at a massive -2500 favorite. However, as the date inches closer, many have begun putting money down on McGregor to pull off the upset and deliver a huge payday, with reported bets as high as $150,000 on a McGregor win. In fact, a whopping 93 percent of all tickets wagered at the Westgate sportsbook in Las Vegas have been for McGregor, tightening the odds gap as low as a +425 underdog. At the expected +500 odds, a $100 bet on Mayweather will net you $14.29 of profit, while the same amount on McGregor would bring in $500 of profit.

Either way, one manager at Vegas sportsbook Bovada noted the event is on pace to be "more bet on than the Super Bowl".

There's a lot on the line, financially and personally, for both fighters, fans, and entire sport of boxing come August 26.

Be There! Witness "The Money Fight" In Person

Will McGregor pull off one of the greatest upsets in the history of professional sports? Will Mayweather defend his undefeated streak and bring the win count to an even 50, in what could be his last professional fight?

We're just 3 weeks away from finding out. Can you afford to miss it?

Although tickets were snapped up in minutes, Winspire can help with both individual tickets and suite access and hospitality. Besides the marquee fight of the evening, the week will likely be filled with fan-related activities, press conferences, open workouts and additional undercard fights to be announced.

If your top performers, big clients and those important to your business are interested in seeing boxing history unfold - let us know in the comments or click below to contact us.